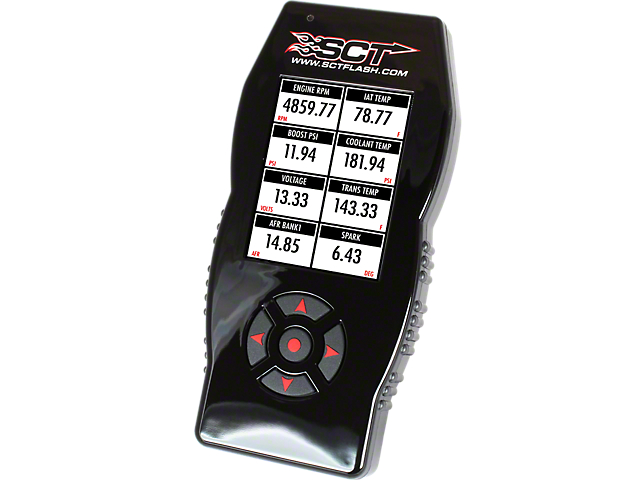 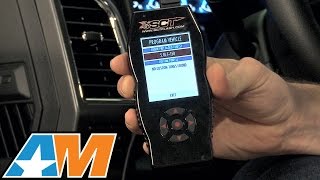 Increased HP and Torque. From the factory, the manufacturer programs their vehicles to cater to the needs of the daily driver, not the performance enthusiast. After loading a SCT pre-configured strategy tune on a vehicle, even a bone stock, unmodified coyote powered F-150 will realize noticeable gains in Horsepower, Torque, and Fuel Economy. Curve Gains of 12 RWHP / 13 RWTQ (87 Octane) and 23 RWHP / 25 RWTQ (93 Octane) have been seen on a bone stock 5.0L F-150.

Increase your mod's potential. Factory computer settings are calibrated for the original factory components. When making performance modifications, you need to recalibrate the vehicle's computer to realize the full potential that these modifications can achieve.

Compact Design. The SF4/X4 Power Flash Tuner measures in at 2.7” wide X 5.5” tall making it much smaller than the original SF3/X3 for easy storage in your center console or glove box. The cord is detachable and there is no battery or power supply needed. It uses the power from your vehicle's diagnostic port or computers USB connection.

Built-in WiFi. The SF4/X4 Power Flash Tuner is now WiFi-capable meaning you will no longer have to plug it into your PC/Windows computer to receive the latest SCT firmware updates.

Diagnostics. The SF4/X4 Power Flash Tuner can also be used as a diagnostic code reader. Save yourself hundreds of dollars each year by reading and clearing your own trouble codes rather than paying a dealer to do the same. Its as easy as a few simple steps.

* Not all adjustments available on all vehicles.

Technical Note. This SCT Power Flash Tuner is not legal for use in California on pollution controlled vehicles.

Not Compatible with Mac Software.