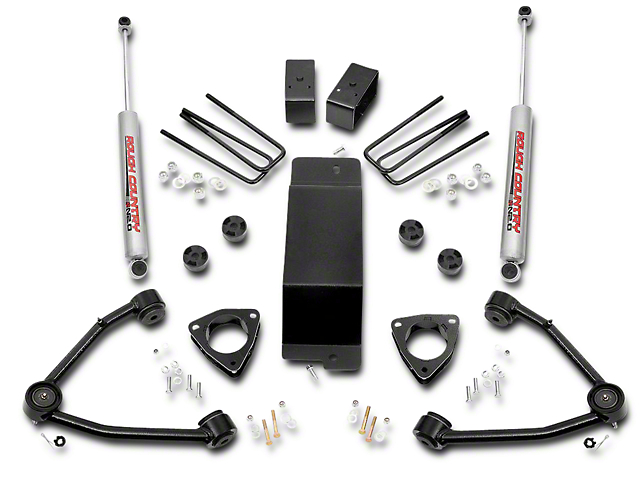 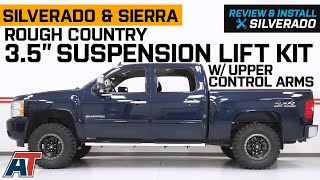 Extra Lift. The 3.5 inch Suspension Lift Kit with Upper Control Arms by Rough Country not only gives your 2007-2016 Chevrolet Silverado the lift that it needs to look intimidatingly rugged, but it also includes several precision parts to enhance your ride. The Upper Control Arms provide a greater range of motion for steering accuracy while the durability of the fabricated blocks and the sensitivity of the N3 shocks will continue to amaze for a long time down the road. Get the ride you deserve with this absolutely incredible lift kit.

Durable Shocks. Rough Country's 3.5 inch Lift Kit also comes with nitrogen charged N3 shocks to ensure you get the best ride both on and off road. The 10-stage velocity sensitive valving is custom tuned to your vehicle, so you're guaranteed a precise, phenomenal ride.

Control Arms. The Rough Country kit ensures that the huge lift that your vehicle gains from the kit does not mean sacrificed steering precision. The control arms are constructed from the most durable materials so you'll see an improvement in your Silverado's steering for a long time to come.

Fabricated Lift Blocks and Spacers. The fabricated lift blocks included in this kit are stronger so they offer enhanced performance for an extended amount of time, regardless of the elements they are exposed to. The kit also includes spacers to achieve a stable, smooth lifted ride.

Installation. The Rough Country 3.5 inch Suspension Lift Kit with Upper Control Arms should be installed by a professional to reduce the risk of injury. However, the kit only takes 5-6 hours to install, so you'll be back on the road in no time. Vehicle will require alignment after installation.

Not Compatible with the 2007 Silverado 1500 Classic Model.

AT makes it simple, once you drop you vehicle information in the browser going to the search bar minimizes time looking through random parts. Found my part in seconds and ordered it.