Find Fender Flares for your F-150 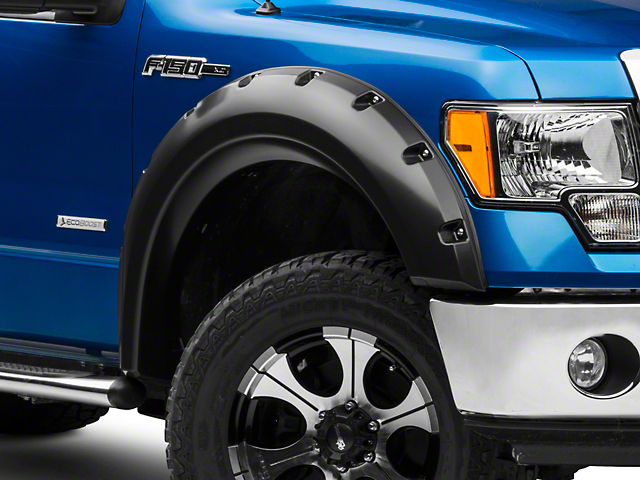 Aggressive Looks and Added Protection. Does your F-150 spend a majority of its time out on the trail or at the work site? If so, a set of Barricade Aggressive Molded Fender Flares are a must. These Flares will add the extra protection you need to protect your F-150's body and paint from stones and debris that get kicked up from your tires. These great looking Barricade Fender Flares feature a much wider than stock, pocket design that will give your F-150 an aggressive off road appearance. Best of all, the wider width of the Flares will provide you with the additional tire coverage needed when you go to install an oversized set of wheels and tires.

Durable ABS Construction. Barricade manufactures their Aggressive Molded Fender Flares from an OEM quality acrylonitrile butadiene styrene (ABS) material. ABS is known for its light weight, superior durability and impact resistance making it the ideal material for use on and off road. Barricade then completes their Fender Flares in an smooth black finish that matches your F-150s existing factory trim.

Bolt-On Installation. These Barricade Fender Flares are designed to install using the factory mounting points and includes all of the necessary hardware for a straight forward install. Minimal drilling is required fit to ensure a perfect fit to your F-150, but no additional modifications to the metal body of your truck is necessary.

Technical Note. Platinum models will require the door moldings on the bed and front fenders to be removed or trimmed to allow the Fender Flares to fit properly.

I bought my truck in December of 2016 when I had to trade in my Mustang. I needed something more practical for daily driving especially living in the North East.