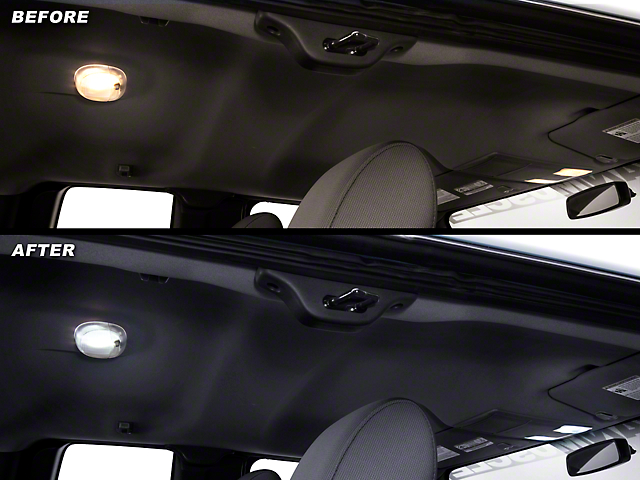 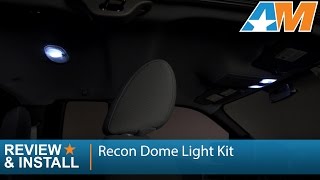 Hey, everybody. I'm Justin with americanmusscle.com. And this is my quick review of Recon's high-power LED dome light set available for all 2009 and 2014 F150s. You should be checking out the recon kit here if the dark and dim factory interior lights just aren't cutting it anymore and you want a huge improvement in light output over those factory light bulbs, along with making the switch to more modern technology in the LED. Now, this is a very basic kit with a basic purpose here, guys, right, to provide your interior with a little bit more light. Now, the Recon kit does include three separate bulbs or LEDs in this case to be used in three different locations, the overhead dome light in the center of the cab and along with the driver and passenger side map lights.So why make the switch to the modern LED lighting? Well, guys, for starters, as you might imagine, they're going to be far brighter than the dull, yellow factory incandescent lighting. In fact, Recon's actually claiming these things are going to be 18 times brighter than these factory bulbs. Now, this should be more than enough lighting for you, no matter what time of day you need them. Along with the additional brightness benefits here, the LED is packing some other benefits as well, such as lower power draw through less wattage, which is going to put less strain on your truck's battery and charging system, which might come in handy if you do happen to leave a dome light on overnight, not going to wipe out your battery.And finally, guys, the LEDs are going to be much more durable and last far longer than those factory incandescent bulbs. In fact, the average life span of an LED or each individual diode is going to be roughly 50,000 hours. So basically, you should never have to worry about replacing these things for the lifespan of your truck. So yes, you are going to be spending a little bit more money initially with this kit here. However, they're not going to be burning out at the rate of those factory style bulbs.Speaking of price, at the $60 to $70 price point for the Recon kit, some of you guys might think that's a tad excessive when compared maybe to some other generic options similar to this. And I don't totally disagree with you in this case. However, what you have to keep in mind is Recon is known for producing some high-quality LED lighting and accessories. So, again, you have to factor that into the price when comparing these to some of your other generic options you might find on other option sites.As for the install, well, there's really nothing to it. Now, I do want to urge you, though, however, to be careful because some of the factory housings ca be a little fragile. And if you start muscling these things around, they might actually break on you. As for that center dome light, simply pull that thing straight down, swap out the bulb and you're good to go there. No real tools needed for that one. On the other hand, the map lights for the passenger and driver's side will require a flat-head screwdriver to release the clips in order to pull that down but, again, very simple stuff here. Again, just use caution. That's all I can tell you. Again, swap the bulbs out for the map lights and you should be good to go there, guys. Overall, a very simple one out of three wrenches on the difficulty meter here for the Recon kit and maybe 30 minutes of your time to get everything in place.To wrap this one up, guys, it's pretty simple. If you don't mind spending the money on the Recon kit here, you're going to drastically improve the lighting for the interior of your F150 while getting some of those secondary benefits when making the switch to a modern LED such as the long life span and the low power draw. That's my review of the Recon high power LED dome light kit, which you can grab for your truck right here at americanmuscle.com.

Improves Interior Illumination. Improve the lighting and appearance of your 2004-2014 F-150's interior by upgrading to a Recon High Power LED Dome Light Kit. These replacement LED bulbs are three times brighter than the factory incandescent dome light bulbs and will keep on glowing for up to 50,000 hours. The Recon High Power LED Dome Light Kit is ideal for both highway and off-road adventures where high powered interior lighting is a must.

Latest LED Technology. The Recon High Power LED Dome Light Kit uses the latest LED technology to ensure your light lasts longer saving you money on replacing your bulbs often. In addition to being energy efficient, these white bulbs are the perfect replacement for your factory lights.

Super Easy Plug-and-Play Installation. The Recon High Power LED Dome Light Kit can be installed in just minutes with no tools required. You simply remove the existing factory bulbs and replace them with the new LED bulbs from the Kit, it is as easy as plug and play.

It looks like my rear (dome/map lamp) bulb assembly has 3 of those long bulbs... one center dome and two map lights. This is not what your picture shows. 2011 F150 Super crew. Is that what it comes with?

What makes these lights so superior to the other options available online?

Do you have these in color?

Do the led lights dim as they go off ?

After they were installed they worked for a few months and now that don't work at all and blew a fuse. Do these draw more amps than the stock?

will this kit work on my 2012 super crew as the kit only comes with the three bulbs but the light for my back seat has three in it when it looks like in the picture the back seat light only has the one bulb 1 answer
Helpful (0) Thanks for your input! 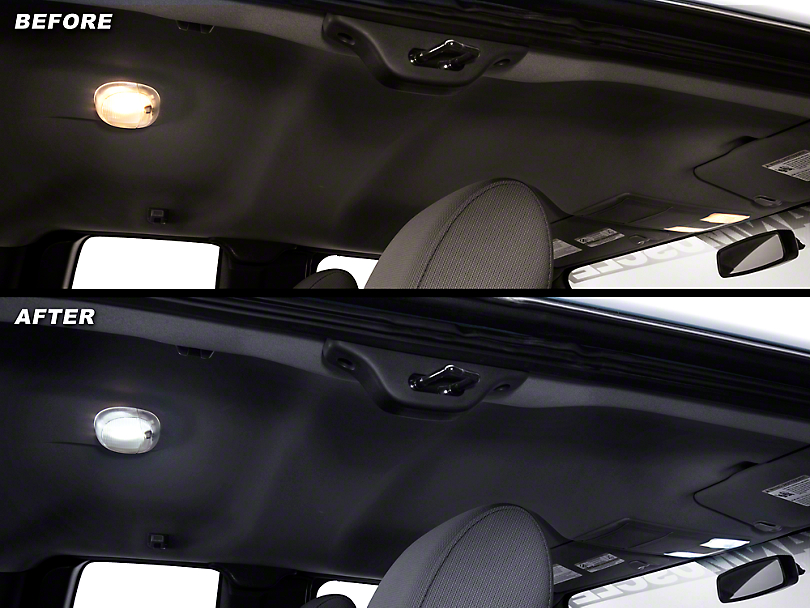 As always it was a painless and fast experience. That's why I will always go to you rather than another place to get the things I need for my truck. A huge thanks once again.